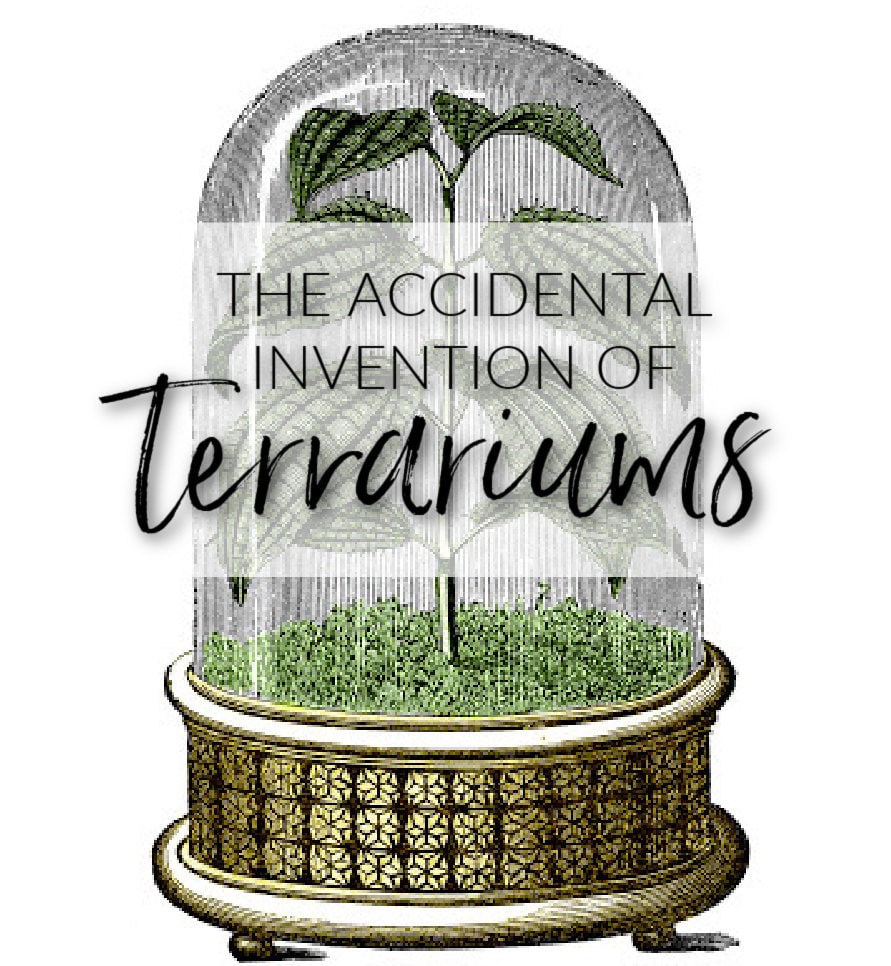 The Accidental Invention of Terrariums

Did you know that the very first terrarium was created by accident? In the early 1800's there was a man named Dr. Nathaniel Bagshaw Ward who was not only a doctor but also a naturalist and enthusiastic yet unsuccessful gardener. He had been trying in vain to grow ferns in his garden. As many of us can attest to, ferns in general are notoriously finicky and difficult to grow if watering and humidity levels aren't just right. To make matters worse Ward lived during the industrial revolution which made growing any plant, sensitive or not, next to impossible.  Acid rain and poor air quality were the norm near his London garden. 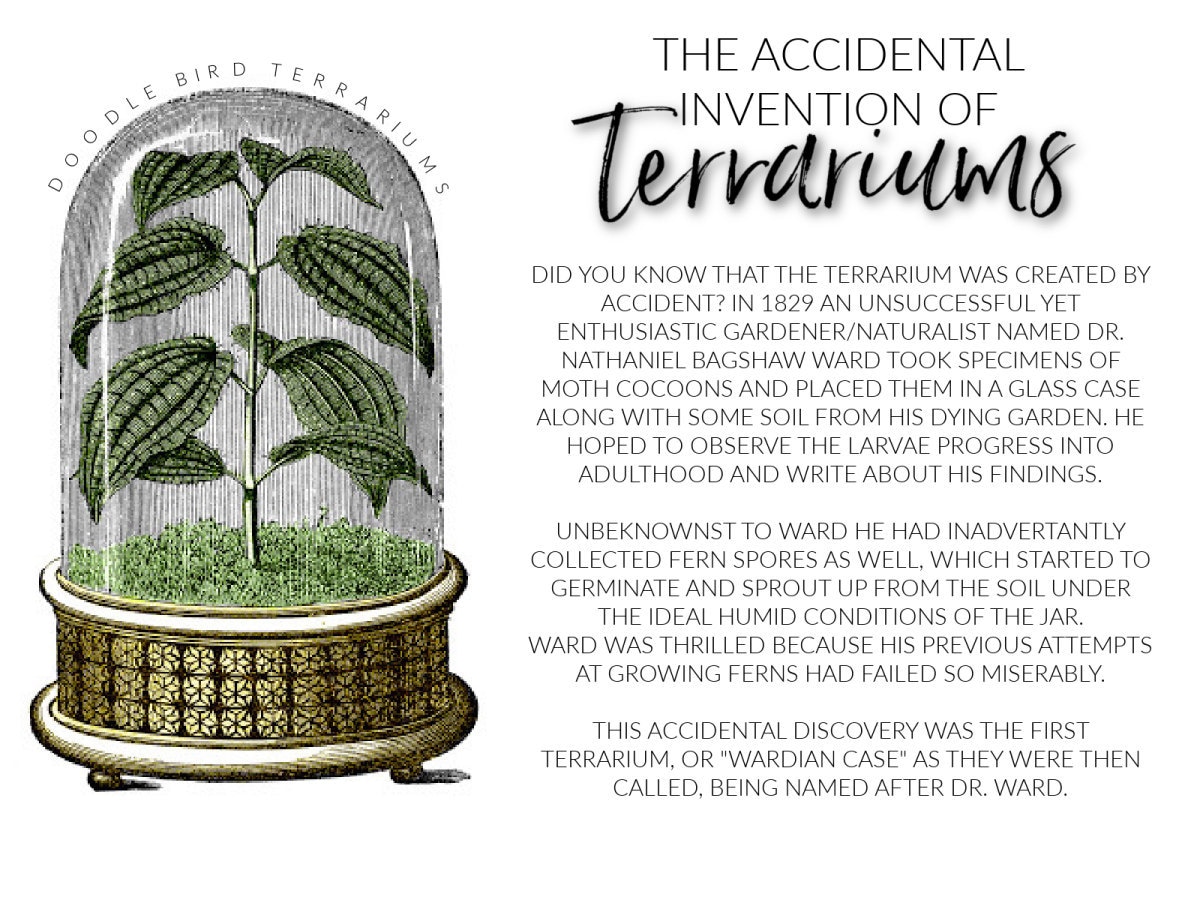 In 1829 Dr. Ward set up an experiment that had nothing to do with plants, but they soon became the main focus. Being a naturalist, he was fascinated by insects and collected several moth cocoons in order to watch them pupate. He placed them, along with a few handfuls of soil from his garden, into a small glass case. Unbeknownst to him there were hidden fern spores, which are microscopic in size, within the collected soil. After a short time in the warm and humid environment he noticed little fernlings sprouting. Over the next 4 years they grew into large healthy plant specimens within the confines of the glass case. Ward sought to find a way to mimic the qualities of the cocoon jar and endeavored to create a similar case that wouldn't rust over time (the original had metal elements that had corroded). With the help of a carpenter, a glazed vessel was created, and became known as the Wardian case. Therefore, this accidental discovery was the humble beginning of the terrarium!

Interestingly, they were not meant to be decorative, at least at first. Large scale Wardian cases were used to ship rare and fragile plants from continent to continent, which could take months to arrive at their destination. Thanks to Ward's invention, tropical plants were able to be studied and eventually mass produced in countries outside their origin. The cases became increasingly in demand, even by the European elite, who began to use Wardian cases as fashion statements in order to show off their wealth. While the outside air was saturated with pollution making the coveted showy gardens of past generations decline in popularity, ferns and rare orchids could now thrive within their new glass homes.

But it was really the Victorians who made terrariums a decorative accent by expanding on Ward's design creating frilly and extravagant cases to house plants. 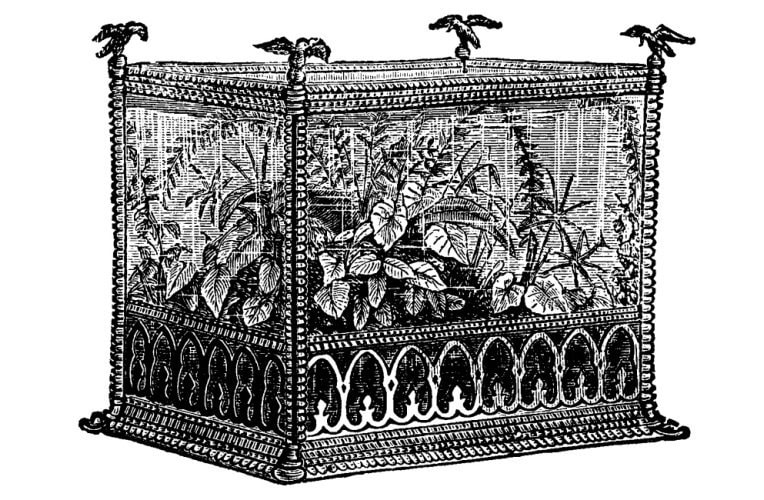 Nowadays, decorative terrariums have made a major comeback. No longer a statement of wealth, anyone can now enjoy keeping humidity-loving plants right in their living room. In addition, there are several variations to the common terrarium: the vivarium which houses both plants and animals such as frogs or lizards, and the paludarium which can house plants, reptiles, and fish or other aquatic life. More on that in an upcoming blog post! 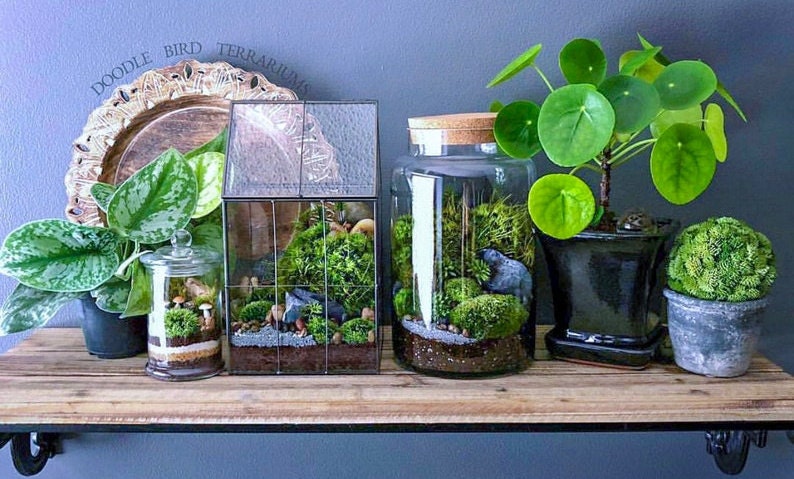 Moss has become a popular plant to use in modern day terrariums because it is highly suited to life under glass. It stays small so there's not much chance of it outgrowing the jar. It also thrives in very humid conditions and does not require a lot of light. There are approximately 12,000 species distributed throughout the world, and these come in many leaf shapes and colors. Some look like tightly woven green carpets, while others resemble miniature scale ferns, palm, or evergreen trees. These traits make them ideal candidates for small diorama-like plantings that depict landscape scenes that can be enjoyed on your desktop at work or countertop at home. 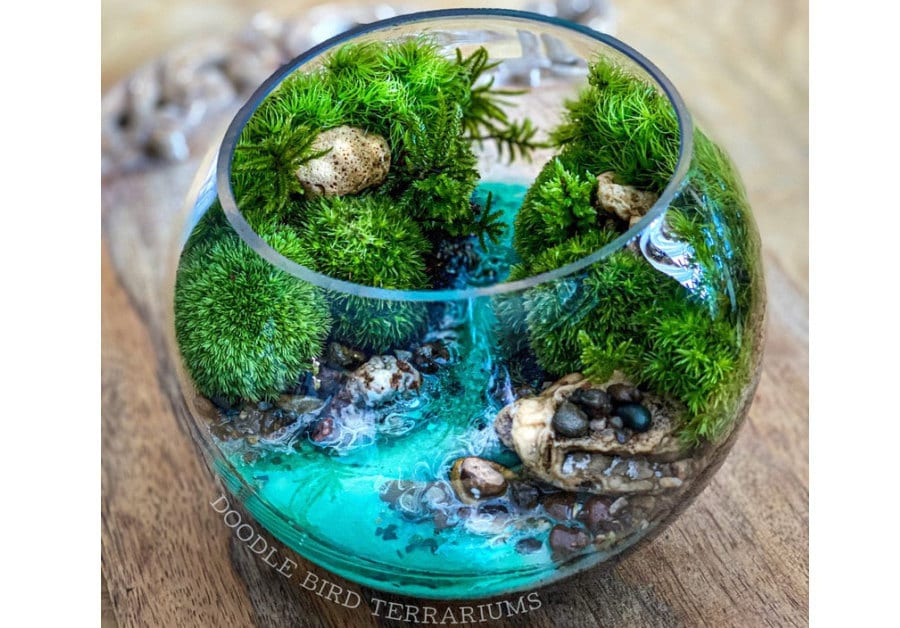 Patricia Buzo, of Doodle Bird Terrariums, takes advantage of these traits by creating tiny landscape (or waterscape) scenes using a variety of mosses. She combines art, design, and gardening into one contained ecosystem and you can own one of your very own. To see a sampling of her work visit her website DoodleBirdTerrarium.com

Let us know your thoughts! Leave a comment or question below.