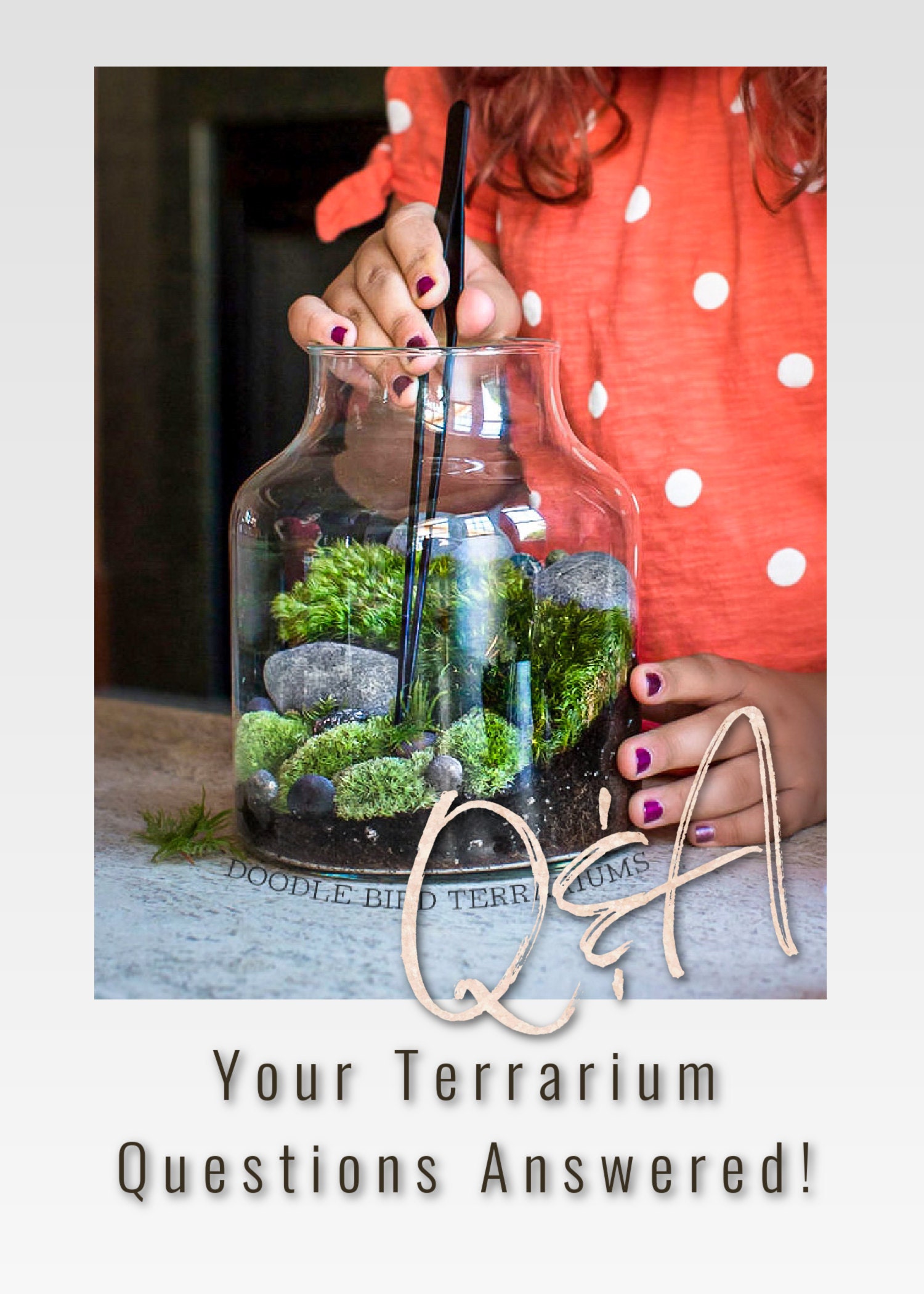 Q: What do I do if I see white fuzzy mold in my terrarium?

A: White fuzzy mold may appear in your terrarium for a veriety of reasons. One thing that can contribute to mold overgrowth is temperature. If the ambient room temperature rises above 74 degreees farenheit you may see a bloom of mold appear, which can spread quickly and do damage. The warmth combined with the fact that the closed jar creates a humid environment makes the perfect breeding ground for mold. As soon as you spot any type of mold be sure to take action before it has a chance to take over. one method for removal is to take a q-tip dipped in hydrogen peroxide and gently wipe away mold. Repeat with fresh q-tips as needed (don't "double dip" with a mold covered q-tip or you will simply be spreading the mold around). Mold spreads via spores that are microscopic and virtually everywhere in our environment. Therefore I highly recommend creating a bioactive terrarium by adding beneficial organisms that feed on mold (Doodle Bird brand terrariums already contain an healthy supply of springtails which feast on...you guessed it...mold). Read more about How to Combat Mold in Terrariums

Q: A mushroom appeared in my terrarium overnight, what should I do?

A: Lucky you! Just like mold spores, mushroom spores are microscopic and were probably hiding in the moss. However, unlike mold, mushrooms will not harm your moss, and in fact may be beneficial, so therefore can be left alone (unless you don't like them, then feel free to remove). Mushrooms generally only last a few days to a few weeks so when they wither and die pull out the "corpses".

Q: I have bugs in my terrarium, how do I get rid of them?

A: Sometimes insects hitch a ride in the moss and will show up in your terrarium. Depending on the bug, you can either leave it alone (yay, a new pet!) or remove it. A common hitchhiker is a tiny caterpiller that is very good at hiding and eventually turns into an itty bitty moth. While still a caterpiller it with weave a little web in a certain area of moss to pupate. Beforehand it eats the moss and you will start to notice tiny tan or green colored balls in the area. These are the droppings. As gross as that may seem, this insect is relatively harmless and you can remove the unsightly "droppings" using a damp q-tip or spray them away with your spray bottle set to a hard stream. Once the moth appears it is easy to scoop out; just let it go outside and that's it! Other less common hitchhikers are tiny spiders or beetles, neither of which harm the moss and most likely will eventually die off on their own. But they can be removed by the official "bug handler" of your household, preferably to let it go outside to live on in peace. Another occasional pest, and one that I hate, are fungus gnats. These also are harmless to moss but are unsightly and extremely annoying. Note that although harmless to moss, their larva can do damage to houseplants because they feed on the roots. In a sealed terrarium you can leave them alone they will die off within a few weeks. I've also used gnat sticky traps which work very well and only need to be used on a temporary basis. A final alternative treatment is to add predatory nematodes which hunt and kill the larvae. NOTE: Do not use any kind of insecticide in your terrarium; you will not only kill pests but the moss as well.

Q: My moss is turning brown, is that normal?

A: No! Moss can change in color from dark green to light green or vice versa depending on light/water conditions but brown or yellow/brown moss is dead. To make matters worse it spreads to healthy moss rapidly so if you see brown patches remove them immediately. You can do so either with a tweezers, scissors, or your fingers...just pinch it out and discard. If you are left with bald areas you can fill these in with rock/stones or fresh moss. Things to remember: - the undersides of moss (the part that doesn't see the light of day) is naturally light tan and may show through a little, especially near the glass, but this is not a cause for concern. Also, do not mistake the tall brownish or yellow stalks as dying moss. These are called sporophytes and are how moss reproduces. You an either remoce them by trimming with a scissors or leave them alone.

Q: There is a lot of condensation on the glass, am I watering too much?

A: This is a good sign and it means you have a healthy water cycle going on within your terrarium! Although it's possible that there is an excess of water, it's more likely that the condensation is forming due to this water cycle.  If it really bothers you simply wipe it off with a paper towel, but I suggest just letting it be so the water cycle isn't disturbed. I created the Terra Clear magnetic cleaner specifically for this purpose, so as not to disturb the terrarium cycling.

Q: I moved my terrarium and now I think it's dying, what should I do?

A: Generally I don't recommend moving your terrarium around too much. The plants will adapt to their environment and a sudden change could cause the moss to go brown or mold to take hold. Place it in a brightly lit room and cool location (around 70-74° F is perfect). That's not to say you can never move it, but if it's thriving then consider just keeping it where it is and you will continue to enjoy your lush green moss for many years to come. Have another question? Try browsing through previous blog posts or contact me directly. SHOP DOODLE BIRD TERRARIUMS