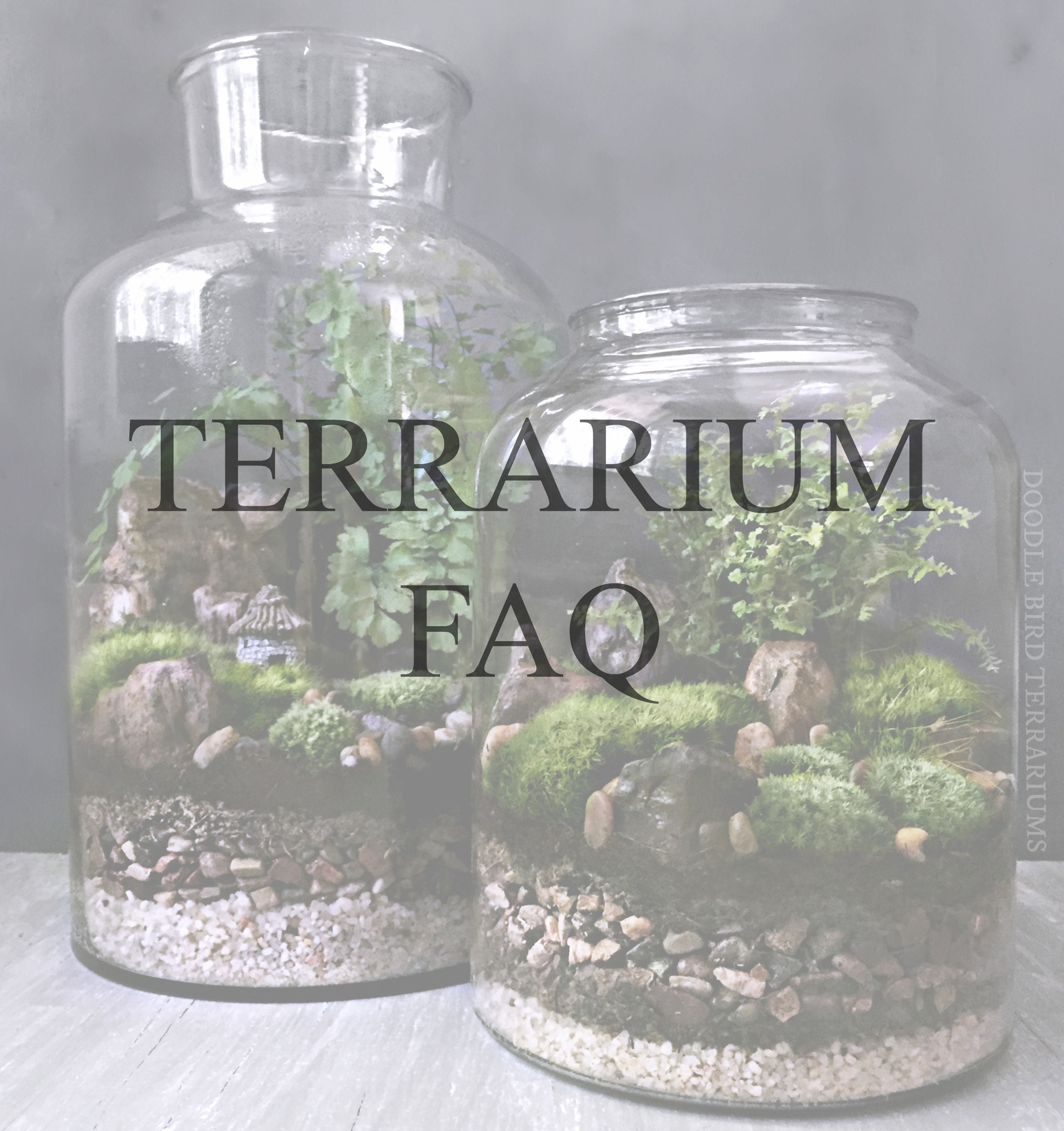 Below are some troubleshooting tips for moss terrariums. The most important piece of advice is: KEEP AN EYE ON YOUR TERRARIUM. Watch for any changes and act immediately. When problems arise things can get out of control quickly, so don't ignore changes in color or the appearance of mold.

Q: What do I do if I see white fuzzy mold in my terrarium?

A: White fuzzy mold can appear when your terrarium is kept in a location that is too warm. The warmth combined with the fact that the jar is a moist environment creates a breeding ground for mold. To remedy the situation, first of all be sure to keep a very close eye on your terrarium for changes. As soon as you spot any type of mold be sure to act  before it takes over. Take a q-tip dipped in hydrogen peroxide and gently wipe away mold from decorations and rocks. Using a new q-tip dipped in water, remove any mold that is covering the moss. Repeat with fresh q-tips as needed (don't "double dip" with a mold covered q-tip or you will simply be spreading the mold around).

Mold commonly hides in the soil so all Doodle Bird brand terrariums are planted using a special substrate that minimizes the chances of mold spores sneaking in that way. In addition, hardscape and decor are cleaned prior to planting. But keep in mind spores are microscopic and everywhere in our environment. Therefore I highly recommend creating a bioactive terrarium by adding beneficial organisms that feed on mold (Doodle Bird brand terrariums already contain these organisms). Read more about How to Combat Mold in Terrariums

Below: Mold that has been left to take over a terrarium. Notice the presence of brown moss as well. Sadly, this terrarium is too far gone to be saved.

Q: A mushroom appeared in my terrarium overnight, what should I do?

A: Lucky you! Just like mold spores, mushroom spores are microscopic and were probably hiding in the moss. However, unlike mold, mushrooms will not harm your moss and can be left alone (unless you don't like the look, then feel free to remove them). Mushrooms generally only last a few days to a few weeks so when they wither and die you can remove the dead parts with a q-tip or tweezers.

Below: a customer's terrarium that grew tall beige mushrooms (the red topped ones are just decorations). She contacted me asking if she should worry and the answer, of course, was no. She was relieved and told me she loved the new look! 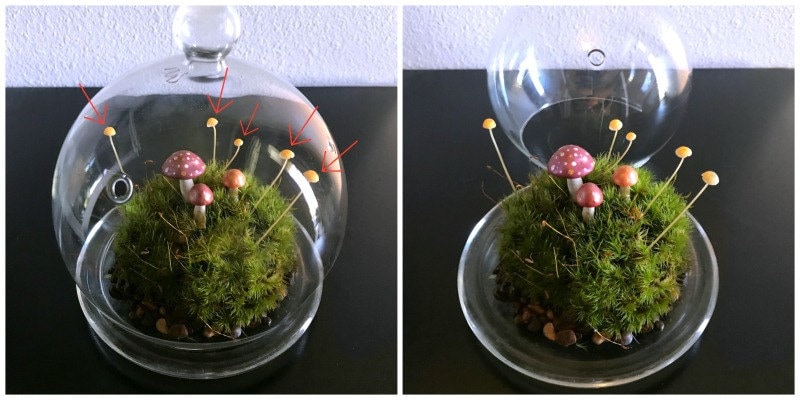 Q: I have bugs in my terrarium, how do I get rid of them?

A: Sometimes insects hitch a ride on the moss and will show up in a terrarium. Depending on the bug, you can either leave it alone (yay, a new pet!) or remove it. A common hitchhiker is a tiny caterpiller that is very good at hiding and eventually turns into an itty bitty moth inside the terrarium. While still a caterpiller it with weave a little web over a certain area of moss, and for lack of a better description, you will see a bunch of little tan colored poops in the area. As gross as that may seem, this insect is harmless and you can remove the unsightly "droppings" using a damp q-tip. Once the moth appears it is easy to scoop out; just let it go outside and that's it!

Other less common hitchhikers are tiny spiders or beetles, neither of which harm the moss and most likely will eventually die off on their own. But they can be removed by the official "spider killer" of your household...but preferably let go outside to live on in peace.

Another occasional pest is gnats. These also are harmless to moss but are unsightly. If you leave them alone they will die within a week and can be wiped off with a paper towel. Do not use any kind of insecticide in your terrarium; you will not only kill pests but the moss as well. Wait it out and the pests will die off.

Q: My moss is turning brown, is that normal?

A: No! Moss can change in color from dark green to light green or vice versa depending on light/water conditions but brown or yellow/brown moss is dead. To make matters worse it spreads to healthy moss rapidly so if you see brown pieces remove them immediately from the patch. You can do so either with a tweezers, scissors, or your fingers...just pinch it out and discard. If you are left with bald areas you can fill these in with rock/stones or fresh moss.

- the undersides of moss (the part that doesn't see the light of day) is naturally brown and may show through a little. This is not a cause for concern.

- many mosses have tall brownish stalks growing up from the green portion during it's reproductive stage and this is 100% normal and not an indication of dying plants.

Below: This brown moss is dead and cannot be salvaged.

Q: There is a lot of condensation on the glass, am I watering too much?

A: Although it's possible that there is an excess of water inside the terrarium, it's more likely that the condensation is forming due to the interior temperature being warmer/cooler than the room temperature. It will cause some fog to appear on the sides of the glass, and although it might hinder the view of the contents, it is not a cause for concern. If it really bothers you simply wipe it off with a paper towel, but I suggest just letting it be. However, if you are seeing big droplets of water running down the sides of the interior it may indicate a bit too much moisture. Simply wipe it off and put the lid back in place.

Q: I moved my terrarium and now I think it's dying, what should I do?

A: Generally I don't recommend moving your terrarium around too much. The plants will adapt to their environment and a sudden change could cause the moss to brown or mold to take hold. Placing it in a brightly lit room and in a cool location (around 70-74° F is perfect) to begin with is best. But that's not to say you can never move it. But if it's thriving then consider just keeping it where it is and you will continue to enjoy your lush green moss for many years to come.

Have another question? Try browsing through previous blog posts or contact me directly.